UG 000 – CNBC’s Jake Novak on Luck, Humility, and How to Navigate the World of Media 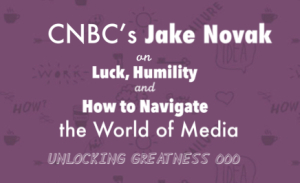 Welcome to Unlocking Greatness, the podcast that analyzes the success of leaders, entrepreneurs, experts and influencers to identify the skills they utilized to achieve their success and how we can apply them to our lives. Today’s guest is Jake Novak, the supervising producer at CNBC’s “Power Lunch”. In the show, we discuss his journey from producing news at a small television station in Bangor, Maine to the coveted halls of CNBC. Jake shares with us his thoughts about the most important ingredients for staying on top of his field, in the broadcasting world in general and how each of us can make a difference in the world of media tomorrow.

JAKE’S BIO:
Jake Novak joined CNBC in September 2012 as the supervising producer of “The Kudlow Report.” In 2015, he became supervising producer of “Power Lunch.” Prior to joining CNBC, Novak co-created and oversaw the “Varney and Company” program on FOX Business Network along with anchor Stuart Varney. He also spent seven years at CNN, producing financial news programs including launching the successful “In the Money” show with anchor Jack Cafferty. Novak has a bachelor’s degree in political science from Columbia University and a masters degree from Northwestern’s Medill School of Journalism.

Thank you for listening to Unlocking Greatness!
If you enjoyed this episode, please leave a rating and written review on iTunes (they affect the ranking of the show) and share the episode on social media (buttons below)! As always, we want to hear from you.  Please leave your comments and guest suggestions in the comments section.

One thought on “UG 000 – CNBC’s Jake Novak on Luck, Humility, and How to Navigate the World of Media”