The Surprising Connection Between Spirituality and Olympic Hockey 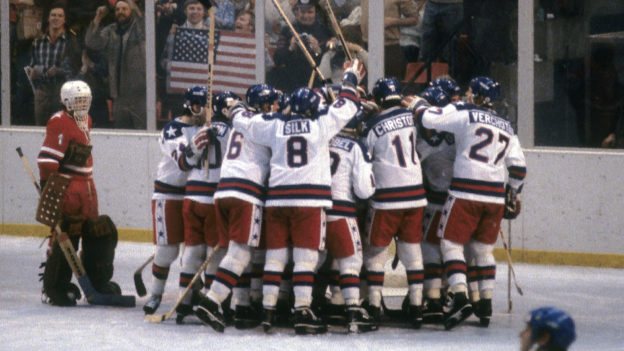 This article is an excerpt from the sixth chapter of Charlie Harary’s book, “Unlocking Greatness”.

One of the greatest moments in United States sports history was the victory of the U.S. Men’s hockey team over the USSR in its quest for gold in the 1980 Olympic Games. In 2004, the movie Miracle tried to capture it for posterity. Kurt Russell played Coach Herb Brooks, the mastermind coach who turned that team into legend.

For modern-day fans, it’s hard to appreciate this, but back in 1980, professional athletes were ineligible to play in the Olympics.

The Olympics were purely a competition for “amateur,” or non- professional, athletes.

That year, the greatest hockey team in the world, by far, was the USSR. Since the team was not part of any professional league, it was able to compete in the Olympics—even though the team’s members dedicated their lives to hockey and practiced together year-round as one team—and every single player was the caliber of a professional athlete. For the United States and most other teams heading into those Games, it was clearly an unfair fight.

To give it some extra context, this all unfolded at the height of Cold War tensions between the two countries. At every turn, the United States and the Soviet Union were actively fighting to prove their superiority on the planet, be it through sports, space flight, or the development of nuclear weapons and defense systems.

Against all this tension, the U.S. team was made up of college players: young, inexperienced, and divided. Many of them had played against each other in college and were still holding on to those rivalries. These feuds were so strong that during one practice early on in training, a fight broke out between the players.

Coach Brooks realized the internal tensions were too high to continue practice, let alone lead to any sort of victory. He stopped practice and had the players gather in a circle. One by one, he had them go around, each stating their names, hometowns, and the teams they played for. He hoped that they would start to see each other as human beings all on the same team, rather than still back home fighting for college glory. But they didn’t. He decided he would have them do this regularly. Each and every day, they would state their names, their hometowns, and the teams they played for—and their responses were always the same.

In the players’ minds, their loyalties remained with their univer- sities, and as they stated their name and hometown, the answer to the question “Who do you play for?” was always their respective college.

The team’s exhibition game against Norway was disastrous, and Brooks finally had enough. So after the game, he blocked the entrance to the locker room and told the team to line up on the goal line to skate “drills.” Back and forth and back and forth they went, and each time the athletes thought a drill was over, Brooks screamed, “Again!” He pushed them to the point of exhaustion— the assistant coach begged him to stop, and the staff in the arena turned off the lights.

Showing no mercy as they skated back and forth in darkness, Brooks finally screamed at them, “When you put on that jersey, you represent yourself and your teammates, and the name on the front is more important than the one on the back!”

The players could barely move. Brooks didn’t care. He made them keep on skating.

Finally, one player got it. He screamed out, “Mike Eruzione, Winthrop, Massachusetts.”

Brooks, realizing that Eruizone was trying to make a point in answering the first two questions even without being asked, turned to him and asked, “Who do you play for?”

Eruzione heaved with exhaustion and said, “I play . . . for the United States of America!”

Brooks paused for a moment and said, “That’s all, gentlemen.” He walked off the ice as the players collapsed in relief.

That powerful scene highlighted a deeper spiritual principle, the one the sage scribbled on the paper in Safed: the indispensable value of unity and the process by which one achieves it.

The 1980 U.S. Hockey Team wasn’t talented enough to win as a collection of individuals. In order to succeed, they needed to become one cohesive unit. One team. Together, and only together, could the organism (as well as the individuals) achieve greatness.

Brooks, in an extreme way, was trying to shift their schemas— to have his college athletes see themselves not as individuals, but as parts of the same team, a team that represented something far greater than any college: It represented a country. “The name on the front (USA) is more important than the one on the back (their individual names)” was Brooks’ way of asking them to not nullify their selves, but nullify their selfishness.

As the movie progressed, that nullification of self-focus and self-absorption changed the way the players felt about each other and themselves, the level of sacrifice they were willing to endure, and the resounding success that they ultimately achieved. It all emerged from that one concept of unity—of connecting to unified energy of the cause: representing one’s country.

As the famed theologian Thomas Merton put it, “We are already one. But we imagine that we are not. And what we have to recover is our original unity. What we have to be is what we are.”6

That’s how life works. We think being selfish is acting in our best interest, but it’s actually preventing us from becoming the best we can be. It taints how we feel about ourselves, how we feel about the people around us, and how much we will sacrifice for what we believe in.

We are like this because that’s how we started. Children begin their lives focused on their needs to the exclusion of others. A baby exhibits constant self-centeredness. They always need everything, immediately. A newborn wakes up at 3 a.m. hungry. She will never say to herself, “You know, Mom’s been at this for days on end. I mean, look at her. I don’t think she’s showered since Sunday. I ate 2 hours ago and will eat again in a few hours. I know I’m a little hungry, but maybe I ought to let her sleep until dawn.”

But at some point, we are supposed to evolve beyond that. Let’s face it, we all know a few so-called adults who have the same mentality as when they were 2 months old. They behave as though the world should revolve around them, as if their purpose in life is to take from everyone, all the time, just to satisfy their own desires.

We may even understand their motivation: Selfishness allows for momentary pleasure. It’s instant, so it feels good for a moment. We all crave immediate gratification. I think most of us, however, recognize that the hit of feeling good disappears quickly.

So we crave something deeper. How do we satisfy that craving? There is only one way. We need to allow ourselves to spiritually mature. To evolve. To convert our selfishness to become more and more selfless. Because learning to be selfless in everything we do is how we remove the blocks to existential fulfillment.

Every moment we choose either to connect to Unified Energy or to block it. And it is in that choice that we can tap into the essence of reality; the ultimate source of all growth, of life, of inner strength, and ability.