4 Strategies to Navigate the Fear of Public Speaking 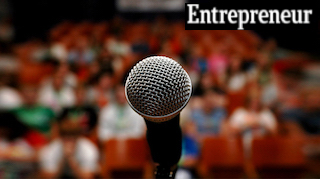 If your heart races when you have to give a presentation to a new prospect or a small group of colleagues, just imagine getting up in front of millions of people.

World famous minister Joel Osteen does just that. Every Sunday he speaks at his mega church in Houston. His televised sermons are seen by over 20 million monthly in over 100 countries.
But he wasn’t always at ease in the spotlight. Joel’s wife encouraged him to fill the pulpit after the death of his father, a naturally charismatic pastor.

When he gave his first sermon well over a decade ago, he was panic stricken. Discouraged by naysayers who didn’t think he measured up to his dad, it took him years to overcome his fear.
Statistically, we are not fond of being center stage. With over 40 percent of people admitting they fear getting up in front of a crowd, it’s safe to say that public speaking is America’s biggest phobia. We fear it more than death.

Actor George Jessel nailed it when he said, “The human brain starts working the moment you’re born and never stops until you stand up to speak in public.”

While you don’t have to follow in Osteen’s footsteps and speak on a global stage, we all have to step into the spotlight sometimes. Whether you’re giving a company presentation or a toast at your best friend’s wedding, if you don’t learn to overcome your fear, you’re bound to trip up and suffer in the process.

No question about it, “getting over” a phobia takes time, determination and hard work. Even accomplished speakers still battle their nerves. But by implementing these 4 strategies, you can learn to better navigate your fear of public speaking despite your self-doubts.

My first job was with a large law firm in New York. One night, I attended a firm dinner and was placed at a table with the top litigator in the firm. Seated next to a legend, I didn’t waste an opportunity to glean some wisdom.

I asked him, “You speak in front of courtrooms all day. When did you stop getting nervous?”

“Stop?” He quipped. “I never stop. I’ll stop getting nervous the day after I retire.”

Nerves are normal. It’s part of the human design.

The amygdala, located in the center region of brain, scans everything around us to determine if it’s a threat. If it senses danger, it puts us in a mode to either tackle the threat or make a run for it. It’s called “fight or flight.”

In the face of a threat, our body’s resources are shifted away from functions that aren’t essential to survival. All our energy and attention are directed to addressing the problem in front of us.

So if you’re hiking and you see a snake, your amygdala gets “hijacked.” It triggers the release of hormones like adrenaline, which rushes through your body. Your heart rate increases, your eyes dilate and you can’t eat. The adrenaline heightens your focus and attention to prepare you to best overcome the threat.

We have the same response to any perceived threat, physical or emotional. That’s why the amygdala triggers a similar response when you stand up to speak in front of hundreds of people.

This all feels like a bad case of nerves, but it’s actually your body putting you in the best position to succeed. Instead of resisting that feeling, understand it, and use it to make you better.

As soon as you’re standing in front of a room of people, do you start thinking, “What if I mess up?” or “What if I sound incompetent?”

One of the reasons we feel so nervous is because we are concerned for ourselves. We are consumed with how we look, the way we sound and whether we are going to be embarrassed. It’s about us and how we will be impacted by our performance.

By focusing on yourself, you not only increase the pressure you’re under, you enhance the thoughts of possible failure.

Try to focus your attention away from your own performance and start thinking of what you are trying to give your audience. Can your presentation benefit them, teach them something new or influence them?

Make a conscious decision to shift your thoughts to how your speech could benefit them.

As you shift your focus to others, you’ll start to feel more excited and less anxious.

Have you ever wondered why you feel a little more at ease half way through your presentation?

As soon as you overcome your initial nerves and get into the zone, your brain goes into performance mode. Which almost always happens once you are up there speaking.

The good news is you can use a “pre-show ritual” to get into performance mode even earlier. This ritual is a simple routine that helps ground you emotionally and puts you into a more positive headspace.

Some people recite an inspirational message. Others use breathing exercises. You have to find what works for you.

As a radio show host and international public speaker, I say a little prayer before going live that reminds me that I have prepared and the rest is ultimately out of my hands. These few lines trigger my brain and get me into performance mode, making me feel less anxious even before I step onto the stage.

Ever wonder why athletes are able to perform under incredible pressure? They’re not superhuman. They just practice.

Professional basketball players get nervous before making the foul shot that could win the game. But they manage to control their nerves because they’ve practiced that shot more times than they can count.

A friend of mine is the chairman of a Major League baseball team. I asked him if I could come down to motivate the players in the locker room but he said no. When I asked why, he said his players don’t need motivation. When they have a fast ball coming at them, what matters is the hours they practiced swinging in training. On game day, it’s the muscle memory that counts.

This concept of muscle memory applies to public speaking as well. Don’t speak for a year and you’re bound to be a bundle of nerves.

The lesson? Do what you fear, and do it often. When you speak regularly your build muscle memory and it inevitably gets easier.

With the right mindset and a healthy dose of experience, you may be filling stadiums yet. At the very least, you’ll nail it the next time you’re asked to give an impromptu speech at the company holiday party.