Greeny and Lessons for Yom Kippur 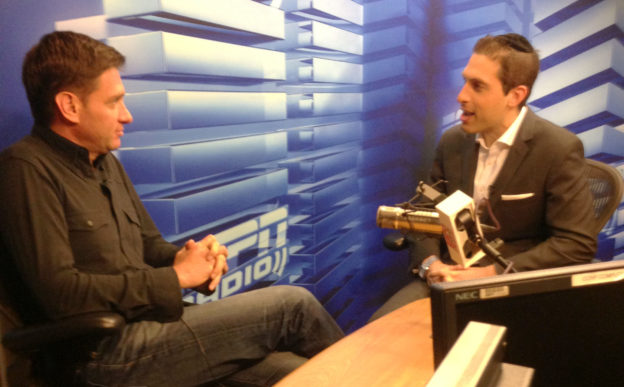 Last week, I had the great opportunity to interview Mike “Greeny” Greenberg, one of the hosts of the uber-popular “Mike & Mike” show on ESPN radio. Greeny is one of the most beloved sports radio hosts in the country, with millions of listeners and fans tuning in to hear his thoughts every day.

My first question of the interview was how he achieved his career success. Everyone has a path, a guiding principle, a maxim to live by. I wanted to know his.

Mike said that whenever an opportunity presented itself, he always felt up to the challenge. When a door opened up in life, even if it was riskier and more demanding, he always went for it. He was constantly looking to perform better, reach higher and try harder. He bet on himself and was prepared to put in the extra hours, sweat and tears to see how far he can go.

His current ESPN show “Mike & Mike” was an opportunity that opened up after he was already at ESPN Sports Center. He was comfortable being an anchor on Sports Center. He knew that if the radio show didn’t take off, he may be risking his entire ESPN career. However, he realized there was real potential. He jumped in, and worked harder than ever before. He woke every day before most of the country (on the road at 4AM every day) and broadcasted on weekends, holidays, and any other time needed to make his show a success. When I pushed him for a maxim, he said “set great goals, and be unreasonable in attaining them.”

As I was driving home from the interview it dawned on me that this not only applies to life, but it’s a core lesson for Yom Kippur. We tend to walk into Yom Kippur with a sense of regret. It’s almost as if that’s the goal, to make us feel guilty (how Jewish is that!) We feel as if something is wrong with us. We’re not enough. We’re never enough. We sinned and we messed up. We’re always sorry.

But in truth, this is not what the Yom Kippur is about. Yes, we say sorry, and yes we mention our sins, but it’s not because we are inadequate.

I remember when I was an associate in a law firm. One of my colleagues was supposed to make partner but when it was his turn to be “put up for partnership” he was rejected. He was devastated. I was shocked. He had been getting positive feedback his whole career. Why would they reject him?

His rejection concerned me. How would I know if that wont happen to me. Maybe I’ll work for years only to be rejected in the end. I called a close friend who was a partner in another firm. He gave me an insightful tip.

He said you’ll know they are considering you for partner, not if they complement you, but if they critique you. If the senior members of the group are going to put in the effort to properly critique you, then they believe in you. Then, you know they are growing you to be a partner.

As Jerry Rice, one the greatest wide receivers in NFL history once said, “if the coach is not riding you in practice, you are going to get cut.”

On Yom Kippur, we stand before the Ultimate Coach, the Omnipotent Partner, the Creator of Humanity and we say sorry. It’s not for being inadequate, but because we haven’t been playing up to our potential. God has been opening doors for us – some in the guise of challenges, some as opportunities – and we haven’t been “unreasonable” enough to put in the effort to capitalize. We’re not inadequate. We just haven’t realized that we are greater than we thought.

Yom Kippur is the day where we ask ourselves, “Have I been playing up?” “When opportunities knock on my door, do I take those risks?” “Is this all I can achieve?”

The path to success is the desire to realize the potential of who you can be and the willingness to put in whatever it takes to make that a reality.

This is the time when we lift our heads a drop higher, when we walk a drop taller, when we see a drop brighter. This is when we look into the year and commit ourselves, as Greeny said, to play up to challenges ahead.

This is when we realize that God is not standing opposed to us, He is standing behind us, lifting us to become the people we are meant to be.