In Honor of the World Series — Former MLB Great: Cecil Fielder on baseball, stress, and integrity 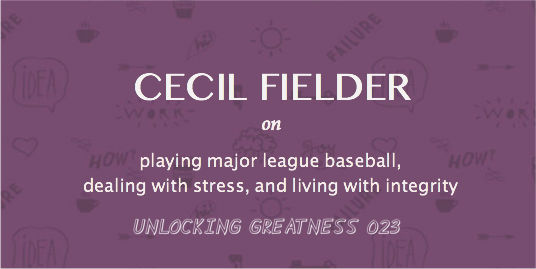 Cecil Fielder, who was an all-star baseball player in the 80s and 90s, describes what it was like to be a major leaguer. He describes the values, character, and traits needed to achieve greatness in baseball and life.

Cecil Grant Fielder is a former professional baseball player who was a noted power hitter in the 1980s and 1990s. He attended college at the University of Nevada, Las Vegas (UNLV). He played with the Toronto Blue Jays (1985–88), Hanshin Tigers (1989), Detroit Tigers (1990–96), New York Yankees (1996–97), Anaheim Angels and Cleveland Indians (both in 1998). In 1990, he became the first player to reach the 50-home run mark since George Foster hit 52 for the Cincinnati Reds in 1977. He is the father of Texas Rangers first baseman Prince Fielder, who has similarly established himself as a premier power hitter over the past decade.